Home Archives Profile Subscribe
Yikes! A Bad Review of TrueTom vs the Apostates! (Part 3)
The Normalization of the F-Bomb

My Meeting Notes, Week of June 27, 2022 (with musings and meanderings)

WatchtowerStudy: How to Set and Reach Spiritual Goals, Theme scripture: “Ponder over these things; be absorbed in them, so that your advancement may be plainly seen by all people.”​—1 TIM. 4:15.

Para 2 ‘Spiritual goals’ can be doing what one is already doing but “doing it in fuller measure.” (! Thess 4:10)

Para 4: Said Paul of Timothy: “For I have no one else of a disposition like his who will genuinely care for your concerns. For all the others are seeking their own interests, not those of Jesus Christ.” (Phil 2:20-21).  Even then a young man like Timothy was comparatively rare.

Para 4: “Ability without humility is a _______?” asks the bro who likes rhyming and who has uttered the phrase many times before. “A tragedy,” says another bro, to deliberately trip him up.

Para 12: You get the impression that Timothy was not a naturally assertive guy, a little shy, had to be told to speak up, don’t neglect the gift of prophesy given him, don’t let people look down on your youth, take a little wine for the sake of your [nervous?] stomach. Usuful to know that because a lot of young people are that way today, with reticence a common trait.

Para 14: I used to say that my ‘spiritual goal’ was to, come preparation for Sunday, reach out and instantly lay hands on the proper Watchtower, rather than every other issue that’s ever been printed.

No public talk today and the Watchtower is abbreviated:

Pursue Peace Convention, Part 1 of 6, streamable at JW.org. (Psalm 29:11) Jehovah will bless his people with peace. And the first song of the language medley is sung in— Ukrainian

Bro Walls points out ‘lovers of self’ may head the list of 19 traits at 2 Timothy 3:1-5 because all other bad traits naturally follow from it.

“Keep in mind in none of these situations was Jacob in the wrong and needed to apologize,” said Mark Sanderson, reviewing several Genesis accounts in which Jacob pursued peace.

“Absalom would say to him: “See, your claims are right and proper, but there is no one from the king to hear your case.” Absalom would say: “If only I were appointed judge in the land! Then every man who has a legal case or judgment could come to me, and I would see that he receives justice.” (2 Samuel 15:3-4)

Sometimes I like to station myself by the elder I love to tease and behave similarly. ‘Oh, yeah, you raise a good point, but fat chance trying to get THAT fellow to give you the time of day.’

“And when a man came near to bow down to him, Abʹsa·lom would extend his hand and grab hold of him and kiss him.” Well—I don’t go THAT far.

“Then the king said to Itʹtai the Gitʹtite: “Why should you also go with us? Go back and dwell with the new king, for you are a foreigner and also an exile from your place.  Yesterday you came, so today should I make you wander with us, to go when I must go and where I must go? Go back and take your brothers with you, and may Jehovah show you loyal love and faithfulness!”  But Itʹtai answered the king: “As surely as Jehovah is living and as surely as my lord the king is living, wherever my lord the king may be, whether for death or for life, there your servant will be!”  (2 Samuel 15:19-22)

This is very much like the Ruth story, minus only the ‘Jehovah’ that gives it special meaning. It still is loyalty. I like it:

“But the king said to Zaʹdok: “Take the Ark of the true God back to the city. If I find favor in the eyes of Jehovah, he will also bring me back and let me see it and its dwelling place.”  2 Samuel 15: 25.  This is not the typical behavior of deposed kings. Most would just take that ark as though their ‘right,’ like an entitled guest stealing the hotel towels.

The Asian-born bro who appends an r to names that don’t end that way—and I spoke privately to him about it because I know he wants to improve—didn’t do it during his Bible reading.

A whole lot of spying and counterspying in this week’s Bible reading:

Yeah! That’s what I’m talkin about!

Do not say: “Why has it happened that the former days proved to be better than these?” for it is not due to wisdom that you have asked about the good old days of 2019

“I wouldn’t buy a used car from that guy,” I was just about to say after watching that video about Absalom kissing up to the commoners, then I thought about the sister’s husband who sells used (and new) cars.

Chuck was flabbergasted to learn no collections are ever taken at the Kingdom Hall. In all his life, he had never heard of such a thing.

Old Merrill used to speak of the fundamentalist church he once belonged to. Collections taken to the beat of music, plates on the no of long poles shaking to the music. Leave coins and the chinks would reverberate. He attributed it to ‘quiet money’ that they wanted. Well, so do we—things cost money—but we manage to get it out of generous hearts, nobody has any idea what another gives.

I think that cut-away of a Kingdom Hall meeting is trying to train us. People are sitting in the front rows, leaving the back open for latecomers. In real life, it is just the opposite.

Comments galore tonight in the program about initial impressions of Kingdom Hall meetings. “You can prepare for them,” is the one that stuck with me. Seldom does worship material lend itself to advance preparation.

Ought one not prefer the expression ‘golden rule’ to ‘human rights?’ The first preserves all that is noble of the second, while discarding all that is pretentious. After all, our own bodies do not respect our ‘human rights,’ crapping out on us after just a few decades.

Watching a mourning dove as it perches on a nearby fence. It’s an odd-shaped bird and reminds one a little of Wimpy who will “gladly pay you Tuesday for a hamburger today.”

My wife wants to catch those small white butterflies that do serious damage to the garden and buy them a bus ticket out of town. She has procured a butterfly net to that end. I half expect to look out the window and see her transformed as though a Twilight Zone episode into a little girl chasing the things.

Run across a patch of these babies unexpectedly and you can do serious damage to a schedule. 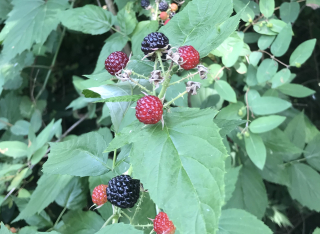 “This lowly one called, and Jehovah heard. He saved him from all his distresses.” Psalm 34:6

“Best article on prayer I’ve ever read,” said the one who called my attention to it.