The Forest in Symbolism and History

Could this really happen?

“Absalom was riding on a mule, and the mule went under the thick branches of a large tree, and his head got entangled in the big tree, so that he was suspended in midair while the mule he had been riding kept going.” (2 Samuel 18:9)

That’s one bad boy of a tree is all I can say!

Maybe the problem was the mule. 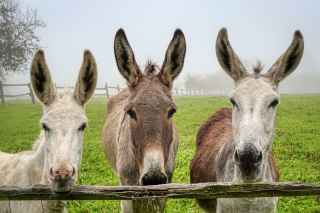 “A mule will labor ten years, willingly and patiently for you, for the privilege of kicking you once,” wrote William Faulkner. Absalom’s mule may not have kicked him, but it sure did do him dirty, hanging him up so hit man Joab could off him.

‘Lord of the Rings’ forests are built on a solid tradition of forests being treacherous, even places where the Devil hangs out! 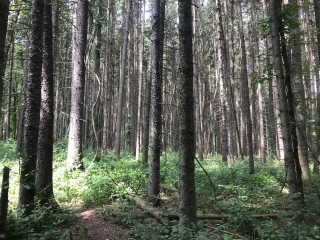 Mistress Higgins is forever trying to lure folks into the forest for unsavory shenanigans with ‘the Black Man.’ (The author of the Scarlet Letter, Nathanial Hawthorne, modeled her after a real person, Ann Higgins, who was executed for witchcraft in 1656.) That forest was one foreboding place, where “the boughs were tossing heavily above their heads; while one solemn old tree groaned dolefully to another, as if telling the sad story of the pair that sat beneath, or constrained to forebode evil to come.”

But at the same time, push deeply enough into the forest and break freeeeee! or at least settle for that illusion.

“Backward to the settlement, thou sayest!” Hester remonstrates with Dimmesdale. “Yes; but onward, too! Deeper it goes, and deeper, into the wilderness, less plainly to be seen at every step; until, some few miles hence, the yellow leaves will show no vestige of the white mans tread. There thou art free! So brief a journey would bring thee from a world where thou hast been most wretched, to one where thou mayest still be happy! Is there not shade enough in all this boundless forest …”

Guelzo (without quoting Hawthorne—that’s mine) points to early writers of American history with this Janus-view of the forest. (Janus—the ‘two-faced’ god facing both left and right) Fearful, on the one hand, but promising on the other. Though the ‘promising’ is for an ‘unpromising’ reason. Press into the forest deep enough and you can escape your own screw-ups from the past! The early American view of history according to Guelzo? “Don’t have any, don’t need any, don’t want any.”.  In new America, the “human experiment” can begin anew!

(“Gimme that fruit!” Adam said. “Let the ‘human experiment’ begin!” ‘No, no, no,’ God tacitly says. ‘You’ll screw it all up! Trust me on this, you do not want to usurp the duty of telling good from bad!’ ‘Nah,’ comes the reply—what can go wrong?)

It’s not winners who came to America. It was losers, those driven out for religious reasons, crushed by financial reasons, or refugees from ‘man dominating man to his injury’ reasons. The first settlers “were radical Puritans who were looking for a way out from under the thumb screws of the Church of England. It was only after every other avenue of escape [was] closed off to them that . . . they turned to those vast . . . countries of America” (Guelzo) And “looking over the bow of the Mayflower what could they see [but a] hideous and desolate wilderness full of wild beasts and wild men. Why, said [William] Bradford, even the air, diet, and drinking of water in America would infect their bodies with sore sicknesses and grievous diseases.”

That forest was a dangerous place, make no mistake. It remained ever dangerous in waves of westward expansion, though fear was mixed with growing confidence as humans invented, and then led, with bulldozers Upon reaching the coast and finally conquering the forest, what remains?

“Space—the final frontier,” intones James T. Kirk, introducing a show that would have been dead on arrival were it not for Lucille Ball. The forests are all conquered, some trees rounded up for a ‘tree museum’ for which you must pay a dollar and a half just to see ‘em! (Joni Mitchell) Space is the new frontier. Boldly going where no man has gone before! What is discovered out there? Guys that look just like us, save for pointed ears. Is that evolution great stuff or what!? Pour me a double-shot of it!

What do aliens gain from their new contact with humans? “One damn minute,” Spock pleasantly responds to one of Captain Kirk’s commands. He’s learned to swear! He had just spent the entire 45 previous episodal minutes on 20th-century earth; he had time-traveled there for some reason and Kirk had told him to use profanity. Keep tuque pulled over ears, swear, and they’ve never know you’re not one of them, he tells the Vulcan.

What a stupid, brain-dead, ignorant stab at science fiction prophesy! How unrealistic! However, had he said, ‘One f**ken minute,’ the forecast would have been spot-on. That’s the course ‘evolution’ has taken.

They didn’t learn that in no forest. No way. They were in all their civilized glory when they adopted that new norm.