Yikes! A Bad Review of TrueTom vs the Apostates! (Part 3) 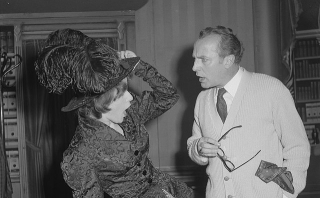 “A patient man am I, down to my  fingertips, the sort who never would, never could, let an insulting remark escape his lips.”

That being the case with me, not just Professor Higgins,* what a body blow it was to be accused of rudeness in that mean-spirited review! “I actually emailed him regarding the JW belief that Jerusalem was destroyed in 607 BCE, long story short he resorted to name calling and insults and then stopped replying.”

Gasp! Did I do that? Resort to name-calling and insults? Me—Tom Harley? It made me do some soul-searching. The entire e-mail exchange is reproduced here, in Part 2 of this series.

Not to worry, Tommy. My soul comes out reasonably intact, particularly given that this fellow’s very first emailed remark is an accusation. To be sure, as he ratchets up his accusing, I ratchet up my defense, but still the closest I come to insulting this jerk this person is when I refer in my final reply to his “blustering.” Oh, and I suppose the remark, “What is it with you? Do you live to argue?” also toward the end, is also in that vein. Nothing more heated than that though. It’s enough to put me on the cover of Patience Magazine, the magazine that has previously featured my car group, endlessly waiting in the driveway while I use my powers of persuasion on Bernard Strawman, who only recently said that he just might come to a meeting some day. He also said something about climate change in hell, but I didn’t understand what he meant by that.

You could even do two, he’d say: “We’re calling on busy people, who have their own religion, and posing a question . . . “

Trust McClure to spin a witticism at the end. This is the same McClure who would, before his companion in field service, upon encountering something unexpected, frantically pass his forefinger from breastbone to belly and back again, making “the sign of the stake.” This is also the same McClure who was among the beset-upon children of West Virginia State Board of Education v Barnett, the Supreme Court decision that reversed the earlier Minersville School District vs Gobitis. (The “Flag Salute Cases”) He passed away several years ago in Florida. With a single exception, I don’t use the real names of persons still alive, excepting only Governing Body members, who are public figures. Come to think of it, that single exception has since passed away himself, so there are no exceptions.

“Of course, there’s a limit,” the grown-up McClure would admit, acknowledging that one couldn’t really say, “We’re calling on busy people, who have their own religion, and who aren’t interested, and posing a question . . . “

So what if you say we’re calling on people who have their own religion and the householder does point out and expound upon how he has his own religion? It’s a point you’ve already acknowledged! That’s why I said this nasty reviewer was ‘blustering’ after I acknowledged his view was the majority one and he proceeded to go on and on about how his view was the majority one! What else would you call it if not blustering?

That said, it has gradually dawned upon me over the years that if you write a persuasive passage for the critics and contaminate it with even one snarky remark, the snarky remark will become the sole focus of attention, to the exclusion of all else. So you ought not do it. This is not easy, because they by no means exercise such restraint. Still, one does well to recall that “sarcasm is the language of the devil,” the Thomas Carlyle saying. Your friends will all think your clever when you say something snarky. If that’s your sole object, you’re okay. But if your aim is to win over an opponent, you don’t look for wounds to rub salt into. I shouldn’t have said “blustering,” nor even uttered the plaintive, “Do you live to argue?”

Would it have made a difference? Probably not. But maybe it would with the appeals court. That’s how it was when the European Court of Human Rights declared Russia’s ban on the Jehovoh’s Witnesses organization illegal. That Court noted: “it is significant that the texts [of Jehovah’s Witnesses that the Russian Supreme Court labeled ‘extemist’] did not insult, hold up to ridicule or slander non-Witnesses; nor did they use abusive terms in respect of them or of matters regarded as sacred by them.” (Italics mine) That restaint didn’t cut it with the accusing Russian Court. But it did with the court of appeal.

George Chryssides, he of the scholarly set (who wrote a review of Tom Irregardless and Me under the pen name Ivor E. Tower that I still use in promo material), was likewise commiserating over a nasty review he had received—the both of us were crying into our online beers. Who is nicer than he? Didn’t save him from the exJW critics, though:

Geo: “I also get a 1* review - an unverified purchase and no indication that s/he has read it. But it's good evidence against the critics' trustworthiness: they really hate it when academics say they can't be trusted!”

Tom: “Yes, I just read that 1*. I like to think, as with  mine, it doesn’t do too much damage because the content plainly reveals his gripe is with the faith, and the book only because it is supportive of the faith. At any rate, you have some excellent editorial reviews from acknowledged experts to offset the single malcontent. Essentially, he is telling his like-minded buddies that this is not one of ‘their’ books.”