An Obedient Heart or an Understanding Heart—Which Is It?

“So grant your servant an obedient heart to judge your people,” Solomon asked in a dream, “to discern between good and bad, for who is able to judge this numerous people of yours?” (1 Kings 3:9)

Imagine such a request—for an ‘obedient heart.’ From a king!—who normally isn’t concerned with obedience to anything or anyone.

Furthermore, God equates this request for an obedient heart to ‘understanding:’

“It was pleasing to Jehovah that Solomon had requested this. God then said to him: “Because you requested this and you did not request for yourself long life or riches or the death of your enemies, but you requested understanding to hear judicial cases, I will do what you asked. I will give you a wise and understanding heart, so that just as there has never been anyone like you before, there will never be anyone like you again. Furthermore, what you have not requested I will give you, both riches and glory, so that there will be no other king like you in your lifetime.” (vs 10-13)

I was just getting ready to comment on this at the midweek meeting when I thought I’d check how other translations put it. We have a handful of them on our own app, some mainstays like King James and American Standard Versions, some eclectic ones like Rotherham and Byington, and a few permutations of our own New World Translation. But for sheer scope, I like Biblegateway.com. Enter your scripture, append “in all English translations” to the result, and you have a list of 54 translations to choose from. It is not “all English translations,” as they say. It is all they have. Rotherham and Byington aren’t there, nor is New World Translation. But it still is a lot. Let’s check how many render 1 Kings 3:9 as “obedient.”

Whoa! None of them do! Well—just one, the Holman Christian Standard Bible. 53 of the 54 translations have something different!

By far, the most frequent rendering is an ‘understanding heart’ that Solomon requested, as opposed to an ‘obedient heart.’ 31 of the 54 versions say ‘understanding,’ with two more saying, ‘a heart that understands’—almost the same thing. The next most common is ‘discerning.’ Some versions change the ‘heart’ to ‘mind,’ as though what Solomon wants is to be the smartest kid in class.

So the New World has an ‘obedient’ rendering that only one other translation has! Did they just write it in? You know how our people like to lay it on with obedience. I was just entertaining the notion that the Witnesses got it wrong when I noticed a handful of versions that suggested they were on to something after all—maybe something others had missed.

The New American Bible—Revised Edition, the one I employed as house Bible in I Don’t Know Why We Persecute Jehovah’s Witnesses: Searching for the Why (because the New World Translation is there declared ‘extremist’) says ‘listening heart.’ The Names of God Bible says ‘heart that listens.’ Oh yeah? Listens to what? Or should it be who?

Indicating it is the ‘who’ to be listened to, the Wycliffe Version reads: “Therefore thou shalt give to thy servant an heart able to be taught, that is, enlightened of thee . . . And the Message Translation, which is sometimes so paraphrased as to veer into ludicrousness, here is spot-on. Solomon requests a ‘god-listening heart,’ it says.

So now I’m thinking that the brothers aren’t so daft after all, that they’re on to something that most miss and nobody but one says explicitly. Hmm. How to research this? Look up ‘obedience’ in the Insight book. There I find that the Hebrew word is ‘shama.’ Is 1 Kings 3:9 one of the places shama is used? The article doesn’t say.

Look up ‘understanding’ in that same encyclopediac work. Nothing.

Okay. Nothing remains than to hop on the great internet with the search terms, ‘1 Kings 9:3,’ ‘shama,’ and ‘obedient.’ This is a little risky because Witness apostates have peppered the internet with a gazillian tirades about how their former religion stinks to high heaven. But in this case, ‘obedient’ is the furthest thing from their minds, and nobody has bothered to weigh in on this particular verse. Instead an article by Daniel Hoffman is pulled up.

“When Solomon prayed for wisdom,” he says, “surprisingly, he did not use the word “wisdom.” What he prayed for, according to the ESV, [Easy-to-Read Version] was “an understanding mind to govern your people, that I may discern between good and evil”

There is a Hebrew word for ‘wisdom.’ Solomon doesn’t use it! What word does he use? ‘Shama,’ the one that Insight on the Scriptures identifies as the root word of ‘obedience!’  Quickly the New World Translation has risen from ‘dog of the pack’ to ‘top dog!’

It is not that ‘understanding’ is wrong as a rendering. It’s fine as far as it goes. But it doesn’t go very far. If it does not convey the idea that ‘understanding’ comes from listening to God rather that simply being innately smart it does its readers a great disservice. Here’s how Hoffman puts it:

“So the ESV translation is not wrong. But I think maintaining the literal translation is better in this case. The more concrete “hear” reminds us that wisdom, discernment, or understanding, biblically conceived, is a matter first of all of hearing the word of the Lord. Wisdom in its biblical conception is not an abstract trait that some people just naturally have, but is a result of hearing the word of the Lord and digesting and embracing it.” (He says “hear” because shama has the connotation of hearing someone, in this case God.)

Is it really necessary to go so far as the New World Translation goes (and the Holman Christian Standard Bible) and say ‘obedient.’ No, I don’t think it is. But it just may be the best choice of renderings. After all, what is the point of ‘hearing’ God if you blow off what he says as nothing? Disobedience is afoot today. It is like what was said to Ezekiel: “Look! You are to them like a romantic love song, sung with a beautiful voice and skillfully played on a stringed instrument. They will hear your words, but no one will act on them.” (Ezekiel 33:32)

Ha! The words are a “romantic love song.” They are inspirational—the stuff of stirring song, moving poetry, rousing prose, but as to obeying them? No. And so Dee mentioned to me the other day how she had commented on someone’s ornate religious edifice he was carrying on about, that yes, people have built many beautiful things for God, “but I almost think it’s better when they find out what he wants and obey him instead.” That got her the fisheye from her recipient but I thought she hit the nail on the head. It’s not unlike what Samuel told Saul: “Look, to obey is better than sacrifice.”

That being the case, that obedience is important to God and we live in a time of marked disobedience, and we strive to avoid “the spirit that is now at work in the sons of disobedience,” (Eph 2:2) you can make a case that ‘obedient heart’ is the best rendering of all.

This is not the first time I’ve spotted the New World Translation with a rendering that at first seems suspect but turns out to be superior. Ronald Sider, in his book ‘The Scandal of the Evangelical Conscience’ grumbles that Galatians 5:13 literally reads, “be slaves to each other,” yet most popular translations dilute the verse to a more independence-savoring “serve one another in love”—a rendering promoting disobedience that he says contributes to the deplorable state of his own people, whose overall moral conduct is identical to that of the greater world whereas it is supposed to be a notch above. The New World Translation, however, holds to the original Greek, with “through love slave for one another.”

I noted it here as well with Psalm 22:16, where the New World Translation stuck to the literal Hebrew whereas almost everyone else succumbed to an at least arguably fraudulent reading.

If the New World ranks with the best translations in these three instances, why is it sometimes said that it is the worst? In almost all cases it is because it does not render certain verses in the formalistic, even if less rigorous, way that they must be rendered to support the trinity doctrine—and adherents to the trinity take offense. There is such a thing as letting beliefs dictate scholarship, whereas it ought to be the other way around.…. 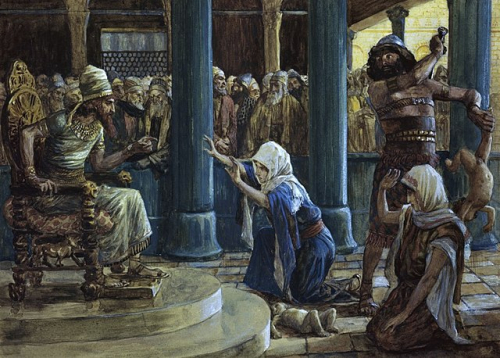 Painting: ‘The Wisdom of Solomon”—James Tissot

(1 Kings 3:9, which this post expounds on, was included in the recently assigned week’s Bible reading. Therefore this post will fill in for that week’s meeting notes.)

I looked all of this up. The text does use "shama", in the present participle form: "lev shomea' ", which literally means "heart listening" or "listening heart". I looked up the word "shama" in the Brown-Drivers-Briggs (Biblical) Hebrew Dictionary. The only reference to "understanding" is in regards to "understanding language":

So the normal meaning is "listen" or "obey".