Home Archives Profile Subscribe
It’s War!
Are We Looking at a Bait and Switch?

PursuePeace Convention, streamed, Part 4 of 6. “The north wind brings a downpour, And a gossiping tongue brings an angry face.” Prov 25:23.   Not a scripture that is cited a lot but was yesterday. Wowee! did it bring an ‘angry face.’

‘Well, that went well,’ sis Harley said about the showdown in the video parking lot

Peace can get blown away, & we must chase and pursue it. Then he likens it to that paper that blows away and stays put until just the instant before you lay your hand on it—and does so repeatedly.

The WatchtowerStudy section on a balanced view of money made me think of that Midas bro who said, were it not for the truth, he could be filthy rich but as it was he was only a little ‘dirty rich.’

Para 7 If you are TOO unbalanced in pursuit of $ it even interferes with your ability to make friends. You never quite know why people flock to you. Sometimes it is because you have dough and they want some of it.

Para 12: “one of the laws stated that a Hebrew king should not “take many wives for himself, so that his heart may not go astray.” Not everyone knows what a common practice this was with kings, who would accumulate zillions from sycophants, allies, business seekers.

Midweekmeeting: The speaker quotes a former CO of ours: “Sacrifice is not a sacrifice unless it is a sacrifice,” and ties it in with 2 Samuel 24:24. I don’t recall him saying this, but it’s probably my bad. It fits well enough.

In this case, it really IS ‘the devil made me do it!’   “And again the anger of Jehovah came to be hot against Israel, when one incited David against them, saying: “Go, take a count” 2 Sam 24:1 who is the ‘one?’   The parallel account reads: “And Satan proceeded to stand up against Israel and to incite David to number Israel.” 1 Chronicles 21:1

‘Look, If even Joab said it was bad, it must have been really really bad!’ one bro says. That guy was all but a hit man.

Imagine that huge guy squashing poor Caleb, jamming into the car’s back seat. My kids later let me hear about it when it was them.

That video on neutrality during war: Just once I’d like to see a war in which one side or the other says, ‘We are the bad guys.’ The king can always persuade his people that they are the wronged good guys.

Deep meditation on the assigned Bible reading here: “Next to him, Eleazar the son of Dodo the son of Ahohi was among the three mighty warriors with David when they taunted the Philistines.” (2 Samuel 23:9) What kind of taunting? “Ha!  Your dad’s a dodo!”

…. I hate when I hear of ghostwriters that turn out to be people.

Look at this selfish bro taking up the one trapezoid parking space! And where does he think I’m going to park my trapezoid shaped car?! 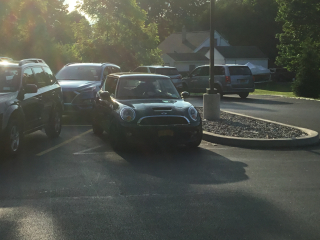 ‘They were all over me—like flies on sh*t!’ that grumbler said, and I tried to tell him that, while it was all very satisfying to compare your enemies to ‘flies’ you really should think through an analogy before you use it.

You should have heard my brother cry when I beat him by over 100, having drawn the x, j, q, z, and k. ‘Well, instead of whining, why don’t you work on your letter-drawing skills?’ I told him. That’s part of the game too! ….   1/2 Then he turned on the radio and it was Janis Joplin crooning: ‘CRYYYY EYYE BABBEEEEE!!! CRY CRY BAABBBEEE!’  Tell me that was a coincidence. ,,,2/2