A Review of ‘Judging Jehovah’s Witnesses:’ Part 2 (Resolving Matters the Next Time Around)

How does an eight to one Supreme Court decision go six to three the other way in just the scan of three years? Did the justices who switched sides have their Acts 9:3 road to Damascus revelation?—“Hey! Why are you guys opposing me? Knock it off!”

The book Judging Jehovah’s Witnesses, by Shawn Francis Peters, examines their later admissions. They were cowed that first time around! They were bullied! They were ‘manipulated!’ Where are the anti-cultists when you need them?

The three ‘flipflopping’ justices were bowled away by the stature of then Chief Justice Felix Frankfurter, who wrote the majority opinion in Minersville School District vs Gobitas: ‘Make those Witness students salute the flag! Kick them out of school if they do not! Oh—and don’t worry about misspelling Gobitis’s name (Court records have it has ‘Gobitas’) Who cares?’

They dared not cross him. “Felix mesmerized us . . . [he] was passionate about the flag and what it meant to him,” one of those justices recalled. Felix was the justice who would walk the corridors of the Supreme Court merrily whistling ‘Stars and Stripes Forvever. (Pg 52) The other three were newbies—scared to take him on!

Moreover, Justice Douglass laments, the powerful dissent of Harlan Stone, author of the minority opinion that later became the majority—he had not yet made that opinion known. When he did, these guys felt it was too late to switch sides. They could have been ‘manipulated’ the other way! Where are the anti-cultists when you need them?

They fretted about it. Coming down to the wire, too chicken to change their vote, Peters’ book quotes Justice Black murmuring, “What are we going to do? Stone is right. . . . But we were wiped out by Felix emotional appeal.”  (P237)  “We decided to redress the wrong the next time around.” 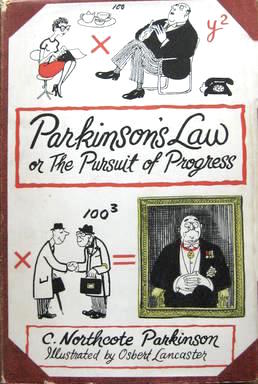 This calls to mind Parkinson’s Law, that book by C. Northcote Parkinson that undertakes to express “laws” of business and human nature in mathematical terms. Illustrating the law that the time devoted to an item varies inversely to its expense, the author presents a board meeting considering its first item on the agenda, whether to approve construction of an atomic reactor. The item passes almost instantly because few know much about atomic reactors—some don’t even know what one is—but nobody wants to confess their ignorance before their peers. They approve it. However, they do so with many a private misgiving Members inwardly feel that they haven’t pulled their weight. They resolve to make up for that deficiency with the next item.

The next item is whether to construct a bicycle shed for the employees. They discuss at great length, since they didn’t do much on the previous item. However, the ‘great length’ at which they discuss this item is nothing compared with the length of the final item on the agenda—whether to switch brands of coffee for break times.

And so the cowed Justices resolved to “redress the wrong the next time around.”

Don’t think the intent here is to villainize those three, nor even the Justice who wrote the disastrous-for-Witnesses majority opinion. Why disastrous? Because it unleashed a wave of savage persecution against them from the general populace. Estimates range of about 1500 incidences of mob-violence during this period, with beatings a staple, sometimes escalating to tar-and-and feathering, and even the occasional maiming, castration, shooting, and hanging. It was a wrong ripe for “redress the next time around.” Still, I know what it’s like to be newbie on a body. I know what it’s like to be swayed by long-time seniors. Probably everyone does, barring those who are naturally truculent. It happens.

‘Don’t let a bully carry the day’ is the tone of current training for elder bodies. ‘Discuss it thoroughly. Draw out the reticent ones. Don’t just run them down.’ It’s human nature for that to happen. Try to counteract it.

“Do not put your trust in princes Nor in a son of man, who cannot bring salvation. His spirit goes out, he returns to the ground; On that very day his thoughts perish.” (146:4-5)

Jehovah’s Witnesses love that scripture. They like the one about a king’s heart being flexible, too, the way it proved to be with the flipflopping three. “A king’s heart is like streams of water in Jehovah’s hand. He directs it wherever He pleases.” (Proverbs 21:1)

I’m still waiting for that to play out with Putin. I’m still waiting that he will look into the banning of the Jehovah’s Witness organization in his country and reverse it. He’s a ‘king’, but he’s also a man with a heart. Now—I’m not holding my breath. But it worked with Ahasuerus, tricked by that day’s opponents to throttle the Jews. Why not he?