Home Archives Profile Subscribe
The Instant Answer of Sunday’s Watchtower and What to do About Adam and Eve
A Review of ‘Judging Jehovah’s Witnesses’—Part 3: Two Horrendous Court Decisions

Watchtower study: An Ancient Prophecy That Affects You

Theme Scripture: “I will put enmity between you and the woman.”​—GEN. 3:15

(See article here on how to handle Adam and Eve. It’s not the easiest sell in these parts)

Para 2: Everyone liked the illustration of the spine that holds pages of a printed book together. Rip it off, one bro said, and you’ve got loose pages everywhere. The info they convey is still present but you can’t make any sense of it.

Para 1: “What did Jehovah do soon after Adam and Eve sinned?” (Genesis 3:15) He had the repair outlined immediately. Many comments on this point, also included here.

Para 4: Ha. There is that drawing of the ‘original serpent,’ Revelation 12:9 identifies as Satan, pondering how the first couple is kissing up to God. You can almost hear him think how he’d like himself some of that.

An aside that has nothing to do with anything, that isn’t in Genesis, but it makes sense and I like it: Paradise Lost (John Milton) presents the serpent saying he can speak because he ate from that forbidden tree. ‘Look what it did for me!’ he coaxes the woman, trying to get her to do the same. I mean, somewhere you have to come to grips that, even in the opening days of Eden, a snake talking would knock your socks off. Milton’s guess is as good as anyone’s.

Para 7: Galatians 4:26 is discussed: “The Jerusalem above is free, and she is our mother.” Is this ‘the woman?’ Jerusalem, the capital city of God’s ancient nation. ‘Jerusalem above’—today’s counterpart over his people’s anywhere? 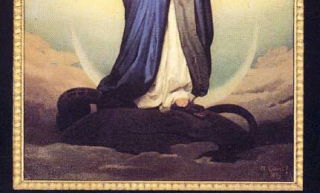 I have seen example of this at the New York Metropolitan Museum of Art—of Mary crushing the serpent. Some discussion of why this doesn’t quite cut it as the ‘woman’ of the prophesy. On one such tour of the Met, led by someone from Bethel, a fellow in the group asked me, ‘Are you Sheepandgoats?’ Whoa—how in the world would he know that? Turns out I had just related a story I had also posted on this blog. To this day we keep in occasional touch.

From the Midweek meeting: 1 Kings 13

“He followed the man of the true God and found him sitting under a big tree. Then he said to him: “Are you the man of the true God who came from Judah?” He replied: “I am.” He said to him: “Come home with me and eat bread.” But he said: “I cannot go back with you or accept your invitation, nor may I eat bread or drink water with you in this place.17For I was told by the word of Jehovah, ‘You must not eat bread or drink water there. You must not return by the way you came.’” At this he said to him: “I too am a prophet like you, and an angel told me by the word of Jehovah, ‘Have him come back with you to your house so that he may eat bread and drink water.’” (He deceived him.) So he went back with him to eat bread and drink water in his house. (13:14-18)

That’s quirky. The liar himself calls him out, as though against his will, and the deceived fellow is eaten by a lion! Any way we can make hay out of this one?

“So the chairman said ‘Stand for announcements’ and Truetom, who always does what he is told, kept standing. But next to him was a brother who said, “Sit down, you goody-two-shoes. What! You would prove yourself righteous overmuch?”

“I dunno,” Truetom said, “The brother said to stand. I think I should.”

”It’s not so bad,” was the reply. “It’s just a small thing. Come on, show a little backbone and sit.” (He deceived him)

”Ha!” his neighbor said, “You failed the test!” And a lion sprung from the row behind and devoured Truetom so that only his fingers were left to tap out this post.”

***Looking forward to the mask-disposal party coming up at the end of the month. I’ll just slip mine off a little prematurely, and. . . .gasp!
So THAT’s how Fred Flintstone got is two tone face.