All You Need to Know about Naaman—Questions from readers: (2 Kings 5)

Dear Truetom:  Naaman “was a mighty warrior, although he was a leper.” (2 Kings 5:1) The footnote says “struck with a skin disease”. So it may not have been leprosy but something else, perhaps psoriasis or similar? 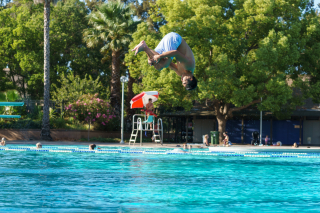 If so, we can await in which a restored Naaman gushes praise, not to Elisha or God, but to Pharma, for making the continual-use pill that cleared up his skin. Then he cannonballs into the Jordan, just like the guy in the ad who cannonballs into the swimming pool as the camera swivels around him in freeze-motion stops. Nobody has the dough to create an ad like Pharma.

Q: No explanation as to why Elisha didn’t come out himself, as would have been a normal thing to expect, and Naaman did expect that. So, was the reason a lesson in humility for Naaman? And why was it so important for Naaman to learn that lesson?

A: Because it makes for a better reading than if Elisha did come out and do what Naaman expected: stand solid in place, call upon the name of God—I  have that reading tonight—and my hands at this point will shoot into the air, and then wave his hand to and fro over the leprosy to cure it. (My hand will do that too, very ostentatiously. These will not be those choreographed gestures that have been likened to synchronized swimming.)

Q: “Now Naaman’s leprosy will stick to you and your descendants forever.” Why were Gehazi’s descendants punished for Gehazi’s sin? And forever?

A: It may have been the reproach of having such a forefather that would stick forever. Especially important in times when family lineage is o so important, not like today when few people give a hoot. ‘Tell us about your grandpa,’ Gehazi’s grandchildren’s schoolmates would ask, and the kids would hang their heads in shame.

A: Maybe. Keep this verse in your pocket in case you ever need it to get yourself out of a spot.

Q: Imagine—Naaman acting on the servant girl’s advice and hustling off to Israel. Maye he wanted his leprosy caught early, maybe he wasn't getting enough respect as a commanding general, or maybe his underling officers were just afraid to get too close to him? At any rate, even the King of Syria (Aram) intervened for him.

A: I’m not so sure. It could be the king of Israel was right when he said the guy was seeking a quarrel with him. (vs 7)  I had that Bible reading last night, so had plenty of time to mull it over. Naaman thought is was worth a shot, but that doesn’t mean the Syrian king did. The two kings hated each other’s guts. He probably thought, ‘Here’s a good chance to stick it to my rival.’  Even on being cured, Naaman seemed to realize it wouldn’t make any difference to the Syrian king. He’d still be bowing down to his dungheap god same as always.

That Bible reading paid a high complement last night. “The kids all paid rapt attention,” one sis told me—the same kids who normally fidget. I milked the reading a little, working up a rage to parallel Naaman’s. Then, upon being confronted by my own trusty servants, (vs 13) I paused, slightly nodded as though to say, ‘That makes sense,’ and then read the final line as an anticlimax.

The assignment helped me in another way, too. I decided that Naaman is the guy I want to meet first in the new system. You know how the brothers are—they’re always spinning that question, and people are always saying Noah or David. The lines to meet these guys will be pretty long. But Naaman will be sitting there all by himself. Of course, on behalf of my former Bible student who has suffered women problems, I may have to greet Solomon first. “Were you out of your mind?!” I will say to him. “What on earth were you thinking?! Even my former student told me he stopped well short of 700!”

I’ll see where the friends are living, too. A while back the local group played a game to post a pic of what will be their dream house in the new system. I’m perfectly content right where I am. Besides, I said (we had some LDC couples with us), ‘Bro LDC is going to make us all live in dormitories anyway.’ But they were pressing me to post something, so I posted a pic of the local boy’s reform school, with it’s razor wire gleaming in the sun. I like it for its bling, I said.

Seemed materialistic to me, but someone said afterward that the full-time servants love games like this because they have lived a lifetime in small apartments. So in that light, I guess it makes sense. Sort of like when I said how visiting helpers or GB always stayed in Bethel facilities or private homes and then was corrected by an old-time Bethelite that they didn’t necessarily. Many of them prefer to do just that, I was told, but they also have a hotel allowance. He ventured his opinion that when they utilized this option it was on account of their wives who wanted a break from the relentless institutional Bethel atmosphere. It was so human that I immediately accepted it as true—and inserted it in the Governing Body chapter of I Don’t Know Why We Persecute Jehovah’s Witnesses: Searching for the Why.

Q: You may meet these guys eventually, but they’ll probably be far away. You’ll be so busy building houses in the new system you’ll forget all about it.

A: Don’t be too sure. “Look at how that brother is missing the nail with every other swing,” one person on the tour commented, watching me trying to attach an overhead tarp. “Say, Truetom, we know you mean well,” someone will say, “but this may not be your special skill set. Maybe you should pay a return visit on that resurrected Naaman. He keeps killing people. Bad habit from the old days, no doubt. Maybe you can encourage him to work harder not to do that.”

Omg you are hysterical - loved this!