Home Archives Profile Subscribe
Psalm 12: The Word is Greater Than the Deed as the Pen is Mightier than the Sword.
Come on Everybody—Clap Your Hands: Psalm 30

“Did you note that the first miracle performed by Elisha was an exact copy of the last miracle performed by Elijah? Why is that of interest? Apparently, Elisha did not feel that since he was now at the helm, he needed to change course right away. Instead, by continuing in the way that Elijah had carried out his ministry, Elisha showed due respect for his teacher, which reassured Elisha’s fellow prophets.” Wt

Hard to put a smiley face on 2 Kings 2:24. About all you can do is assign it to a bald brother who will point to his own shiny dome as though one of a protected species. That doesn’t mean I didn’t try to brighten it up a bit, though with this post on ‘Bullfights, Bearfights, and Elisha the Prophet. Remember that tormented bull that got loose a few years ago and charged into the stands?

And what does ‘Go up? you bald head!’ mean? Sort of like Herod taunting the Lord to work a few miracles for him? ‘You probably have been subject to every insult in the book,’ I told Pearlsandswine, ‘but not one has ever told you to ‘go up’.

One bro spoke of how Ahaziah fell through the grating, so how “grateful” we should be for safety rules to prevent such things, and I thought he was going to build on that play on words but apparently he had just stumbled into it. If he had fallen into the privy, maybe we would be priviful over it.

When the bro asked if I would wipe down chairs, I answered like Elijah: ‘You have asked a difficult thing. If you see me after the prayer, it will happen that way; but if you do not, it will not happen.” 2 Kings 2:10

‘Invite the crime syndicate into your home and they may not come. But they may come—you never know. Why would anyone invite them?’ So a certain bro spoke of spiritism—inviting demons into the home. That doesn’t mean they’ll come—they may not—but they might. 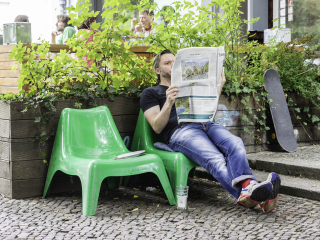 One distraught over violence in the Bible, as though imagining it is not history but a grade school primer on being nice, might focus on cheery parts of the reading, such as this recent week’s account of Jezebel trying to make it hot for Naboth, a course of action that necessitates her finding some “good for nothing men.”  (1 Kings 21:10)

Close your eyes and trying to visualize the scene. Picture Jezebel taking out an ad in the classifieds: ”Help wanted: good for nothing men.”

“Um—that would be me,” qualified applicants would reply.   (Photo: File:Man Reading Newspaper, Wikimedia)