Witnessing on the Airplane

I did not take my first commercial flight until I was in my 50's. It was very exciting. Successive flights increasingly became a pain, mostly for things having nothing to do with the plane but for the hassles in boarding. In the old days, you could pull up with 15 minutes to spare, and nobody at all wanted to strip-search you.

Sometimes, witnessing helps pass the time. I don't always do it  but sometimes I do. Like one flight where I laid the contact card down on the armrest midflight and said to the man traveling next to me: "Everyone has a cause, and this is mine. We don't have to talk about it. We don’t have to talk about anything. On the other hand, there is time to kill, we will never meet again, and if you want to, okay."

It was a while before he said anything, and I began to figure that he would not. However, he presently opened up on the purpose of his trip and on his background. He was a microbiologist at some university in Iowa. He said he liked the power of faith, but of course, he was a scientist. We exchanged some boiler-plate remarks, and somewhere along the line, just so that he would know that he wasn’t talking to some donkey, I mentioned telemeres. He took up the topic but pronounced the word differently. "You mean I've been making a donkey of myself all these years, saying it wrong?" was my response.

It was just idle conversation that ensued, not particularly going anywhere. Then, out of the blue he brings up that his trip has another purpose. He is traveling to get his daughter out of her latest jam. He doesn't know what happened to her. He did his best to bring her up right, but she takes up with one lowlife scoundrel after another and has made a hopeless hash of her life.

I didn't say: "Too bad she is not a Jehovah's Witness. Then all of her troubles would be over." I mostly just listened and asked a few questions to draw him out. Who doesn't like to be reminded what can happen to kids in the absence of Bible principles and sometimes even with Bible principles? But he didn’t know me from a bag of beans, and yet he turns to me as though I was Father Confessor. It was likely because he had NO spiritual component to his life, and when he at last came across one, the dam burst.

The time flew with the plane and we landed in no time at all. I'll never see him again, most likely. But you never know. Perhaps he will be like the man who accepted a few magazines, but eventually told me he would do so no more because his wife was allergic to newsprint. 'Look, just tell me if you don't like them,' I said to myself. 'What a stupid excuse!' Years later I met them at a convention, both baptized. 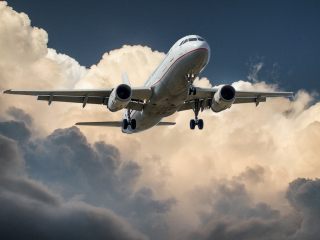 Maybe You Can Come Pick Me Up For Meetings

She was a big, disheveled, super-friendly and warm woman sitting on her wheeled walker outside Wegmans who said Hi! as I walked by. I stopped.
Can I ask you a question? she said. You see, she had to catch her bus – that one across the parking lot - she’d missed one and she was freezing, but the dog had eaten her money or something and she needed $3.
How do I know you’re on the up and up? I asked. She replied she guessed I didn’t but grab her hand and just feel cold she is. ‘Well, I can spare $3,’ I thought and handed it over.
I also gave her a card. ‘Just so you know,’ I said. ‘Do with it what you will on your own time.’
On seeing the card, she lit up. Do I know so-and-so? What about what’s-his-face? How is this one doing and that one and a third one? She was raised a Witness and went to the Hall (the same Hall I had gone to, though not at the same time) But she had not taken hold.
'I went to prison for a few years then I got hit by a car and then I went into a coma. They were going to pull the plug on me but someone said ‘no.’ She related all this in the most happy tone you can imagine, as though describing her day at the amusement park. Her appearance suggested that everything she said was true. She had every ‘right’ to be bitter and sullen but she wasn’t – a huge plus in my book. I’ve seen white people (and black) carry on and on with far less hardship.
‘I’m surprised that Wegmans didn’t chase her away,’ my daughter said. But had they tried it on my watch, I would have chased them away. As we chatted, a woman left the store and handed her three more dollars. ‘I said I would once I got change.’ ‘See? Now you can go home and come again tomorrow,’ I told her brightly.
I picked up some items inside and met her again just outside the door. A man was giving her money. ‘Yeah, they get awfully good at that,’ my daughter said, who does her ministry in the city and isn’t put out by such goings on at all. After all, it must be put in the context of a worldwide financial system which is itself a scam. ‘That’s why I love you, Dad,’ she said. ‘You never judge.’
Without the slightest encouragement on my part, she had brightly said: “Maybe you could stop by my place and take me to meetings again!” And maybe I can! Or maybe I’ll pass her story along to the aunt she mentioned, who would know the story better than anyone. 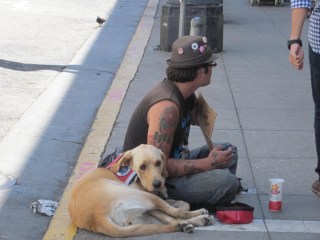 My daughter told me of an elder (an old one) who had run across a homeless man who said he was disfellowshipped. The brother went farther than most and cupped the back of the guy’s head – you never know for sure how clean they are and where they’ve been sleeping. ‘Why don’t you come home? We’re waiting for you.’ The fellow did come home, got his act together, and is active with a congregation today.
Look, don’t try to con us. Jehovah’s Witnesses are more street-savvy than most. We work in all areas door-to-door, after all. We weren’t born yesterday. But we will make eye contact, and in the event we do give money, we will not insist upon letting go of it before you touch it.
photo: © BrokenSphere / Wikimedia Commons
Tom Irregardless And Me   30% free preview. Afterwards we can talk, your people and mine.
Defending Jehovah’s Witnesses with style from attacks... in Russia, with the ebook ‘I Don’t Know Why We Persecute Jehovah’s Witnesses—Searching for the Why’ (free).... and in the West, with the ebook ‘TrueTom vs the Apostates!’ (free)

Posted at 09:34 AM in Experiences - Informal Witnessing | Permalink | Comments (0)