Put Your Things Away When You Are Done With Them, @AAFO4ever!

Put your things away when you are done with them! Someone could trip. My mother told me this countless times. Why didn’t @AAFO4ever’s mother tell him the same?

He landed his plane on the runway. Well, okay. Then he put it on the taxiway. Well, I can’t fault him for that. But then he just LEFT IT THERE! 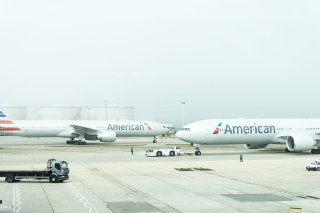 Harrison Ford could have been killed! He tried to land on the taxiway and almost hit the plane that stupid @AAFO4ever hadn’t put away! Now do you see why putting your things away is so important, @AAFO4ever?

Look, we must all act together to protect our celebrity national treasures, because when they are gone they are gone. “A scary moment for Harrison Ford," CBSThisMorning said. They didn’t mention you or your 130 passengers. Who cares about them? Passengers can be replaced, @AAFO4ever, as can you. Boeing can even build you another airplane, but if our celebrities die – well, I don’t know what to say.

Every day I rail at people who should know better to put their things away!  I talk until I’m blue in the face! I don’t know what more I can do.

The Tidy Dogs of Ellicottville

Although most quality of life measures have declined duirng the past few decades, there are a few bright spots. For instance, people today have to clean up after their dogs.

This was not always the case. Dogs were once permitted to let loose any place they pleased, and few people my age escaped the experience of sliding headlong through a pile of you-know-what, say, in pursuit of a fly ball. Let me assure younger readers - there is no experience quite like it. But now folks follow around their dogs with inside-out plastic bags, ready to pounce at the first sign of nature.  How can this not be a good thing?

It's in this light that we must view modern efforts to tax or sue industries that deal with hazardous and/or sinful products - cigarettes, gambling, alcohol, asbestos, lead, guns, pollutants of all types, even piping hot Mickey D coffee. To varying degrees, all these items exact a social cost. Why not have the makers clean up their messes, just like we do with our dogs?

But has the pendulum swung too far? Driving into Ellicottville (about 100 miles to the southwest of Rochester), one encounters a sign informing that unnattended, defecating dogs will not be tolerated, and then adding "dog waste is unsanitary and harmful to our children." It's not the prohibition that forces a double-take; it's the preaching.

Ellicottville was once one of those tranquil backwater towns where homes were mobile but the five vehicles in the yard were not, where hogs roamed freely in the streets and houses, where "yeppur" was the pleasantry most frequently heard, a town that then-campaigning Eliot Spitzer included in his observation that upstate New York reminded him of Appalachia.

Ellicottville differs from neighboring towns, however. It sports a ski resort: Holiday Valley. In recent years the trendy people have discovered E-ville and have decided to make it their own. It used to be that for the price of a postage stamp you once could buy any property in town, now land prices are out of sight. And, of course, the high-brow folk bring their wisdom with them. Like the aforementioned sign. Dogs have been pooping in the woods since the beginning of time, yet the outsiders just have to lecture "did you know that s**t smells?" with every confidence that the local dimwits will be dutifully grateful and wonder how they ever managed on their own.

Incidentally, we all know what s**t stands for. So why not say it? The truth is that I'm trying to clean up my rating.

Have we come too far in our quest for safety and sanitation? Tom Whitepebble has already opined that today's obsession with safety is itself a fallback positionfor people unable to change things that really matter, so they redirect energy to hassling all the rest of us with more and more "safety" rules. And in the September 17, 2007 Wall Street Journal, reporter Cynthia Crossen points out that we've been down this road before. Almost 100 years ago began another safety campaign in the United States, a campaign progressive for its time, yet the palest shadow of what gets pushed today.  Syracuse NY, only 90 miles east of here, slapped "Safety First" warnings on sidewalks, utility poles, restaurant menus and theater programs. "No one in Syracuse can get away from the sign of 'Safety First,'" boasted the local newspaper. Somewhere else in the state, a Museum of Safety opened, and the theme echoed throughout the country.

But in time there was a backlash: wasn't America becoming a nation of wimps? "Life must be lived as an adventure if it is to be worth carrying on," said someone from the National Bureau of Casualty and Surety Underwriters in 1923. And Francis Greenwood Peabody, a Harvard theologian agreed: "What an undiscouraged and expectant person wants is not 'safety first' anymore than a sailor wants to lie safely in harbor."

I wonder what he would say today if he tried to scale a modern store-bought stepladder, with dire warnings at every step, turning to absolute panic as one nears the top. Yes, we really have become a nation of crybabies. Ah, but for the good old days where dogs pooped anywhere and nobody gave a sh.....well, I mean, people just adjusted.

Tom Irregardless and Me     No Fake News But Plenty of Hogwash