At the Northeast Classic Car Museum 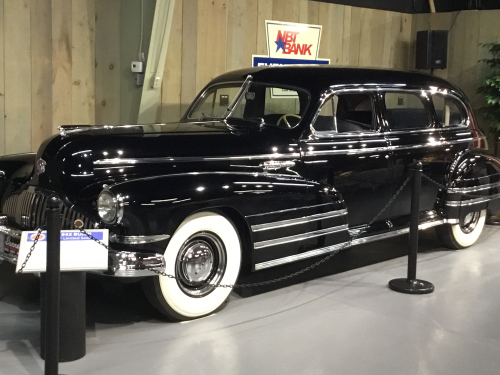 It is a 1942 Buick 91F—that competed with Cadillac, much to Cadillac’s dismay. Only 85 were build before production ceased due to WWII. About 10 exist today. Purchased by a doctor who held it to his death in 1951, it eventually wound up property of Bennett Buick in Wayland, NY. Bennett is the oldest continual Buick dealership in the country.

The museum is in the tiny town of Norwich, southeast of Syracuse. It is several large metal barns cobbled together and you roam from cavernous area to the other. My wife and I had almost finished touring the complex when, struck with the idea, I backtracked and photographed nearly every car, as well as its placards. (My wife was very good about it.) The docents are mostly old guys. They love cars. They volunteer. It takes nothing to get them talking.  One fellow I chatted up had lost his wife after a lengthy illness. He had turned his life upside down so as to care for her, and he spoke of how he would not do anything differently were he to do it again. I spoke of the resurrection a bit, to his moderate interest, and told him how I had been able to care for Pop in his own home until he died.

So taken was I with the museum that I purchased an overpriced DVD covering stationwagons—hasn’t the breed died out now? does anyone still make them—entitled Wagonmasters. There were awards and praises on the jacket, such as, “A highly entertaining film.” George Conboy, the stockbroker, called those words “very faint praise indeed,” and indeed, the video was pretty much of a dud, but if you reveled in the bygone era, you still might enjoy it. The video I probably should have viewed first—but it is still wrapped in plastic on my bookshelf—is The Staley Collection, in which local collector George Staley rattles on with historical dope and personal anecdotes about 32 automobiles from his collection. I know that video is good because they had it running on a repeat loop at the entrance to one of the warehouses. Maybe George Conboy will do one of these with his collection, too, someday,

The wagon they should have had was the 59 Chevy I spotted just recently in Buffalo. 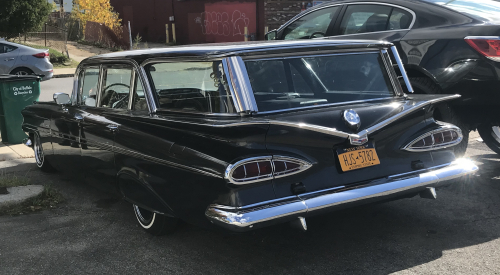 Don’t you love those sideways fins? No other maker has such fins, though vertical ones were a dime a dozen. The finned era only lasted two or three years. Given how large those cars loom in memory, one would think it an entire decade. But they were just beginning in 1957–but 1960 there were just a few hints of them, and the following year they were gone.

I told George Conboy (via Twitter—I’ve never met him in person) about the Chevy—restored from Idaho, the garage owner told me, or was in Iowa?—and he said he wouldn’t mind it at all in his collection. He has a fair-sized one, and he will roll out a selected one, such as his 63 Corvair convertible, for special events in the city. “Shouldn’t you be out chasing TSLA to the moon?” I retorted to some barb of his at a time when the stock was headed there. But he replied that chasing stocks was not his style. Of course! He is the trusted area stockbroker, and he cannot be seen as flippant with other people’s money. Whenever there are gyrations in local stocks, such as when Kodak soared and then plummeted a few times at reports they might produce a Covid vaccine ingredient, coupled with allegations of insider trading (which turned out to be false), he is the go-to guy for media, and he explains it all to them. He also tweets photos of his cars, even devising ‘Can you identify?’ quizzes, and I torment him with pictures of Ramblers—like this one:

“There!” I said to Pop as I laid down his breakfast before pulling the fuse for the stove so he wouldn’t burn down the house while I left for the day. “I don’t know why I’m so good to you after you were so mean to me, making me drive Ramblers, and all my classmates ridiculed me, when what I wanted was a Mustang!” “Seems to be we had a Mustang,” the amiable fellow with dementia replied, “and you smashed it up.” No, we never had one at all. We had Ramblers—straight up Ramblers. However, a teen has to defend his family’s choice of vehicles, and I may have developed my lifelong habit of sticking up for the underdog by continually doing just that.

My cousin’s husband restores Mustangs—just Mustangs, just first generation Mustangs, and just fast backs—he won’t touch anything else. If you price them 30K or so, people beat down your door to get them, but if you bump up the price to $50K, “that slows them down a little,” he tells me. Note this before and after (not the same vehicle): 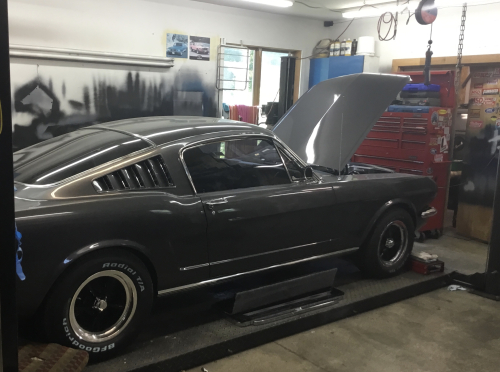 Are there that many salvageable old Mustangs left? “There’s getting mighty hard to find,” he says. Nonetheless, I just spoke to my cousin, and he has four on tap. 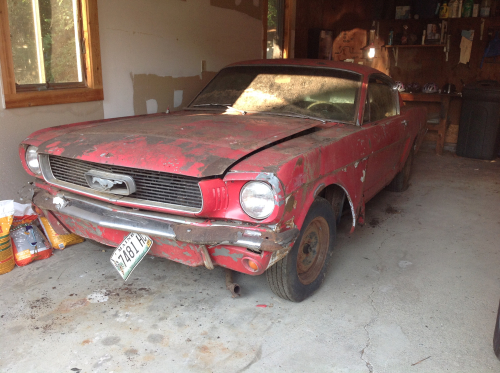 The Northeast Classic Car Museum would jump on that 59 Chevy in a heartbeat, probably, though they would hold out for someone to give it to them. Most of their cars were donated and many were on loan, such as Bennett temporarily parting with his long-stretch Buick. I forget the details, but the governor of New York promotes the place as a tourism draw.

They might have to fight over the Chevy with the closer Buffalo Pierce Arrow Transportation Museum. This place is smaller, though the holdings may be larger. A docent there, who also volunteers, spoke of about a dozen warehouses throughout the city stuffed with both autos and memorabilia. They don’t do memorabilia at the Northeast Museum—it is straight cars for them—but at the Buffalo museum there is as much memorabilia as cars. Supposedly, the owner bought up scads of downtown property during the 80s and 90s blight, then accrued a fortune as Buffalo renewed by operating them as parking lots. The most plebeian car there, though it is hardly any slouch, but is there for sentimental value, is the owner’s own 63 Chevy convertible, bought new, for a price that seems absurdly low today. Though the modern generation will scarce believe it, there were once about 150 auto makers in New York alone; a chart at the Northeast Museum lists them all.

Oddities at the Pierce Arrow Museum include a full-scale model gas station by Frank Lloyd Wright. In the early auto days, once cars were refined enough that one need not be so macho to operate one, Wright envisioned women drivers gassing up at stop-offs that would be built glamorous on their account. 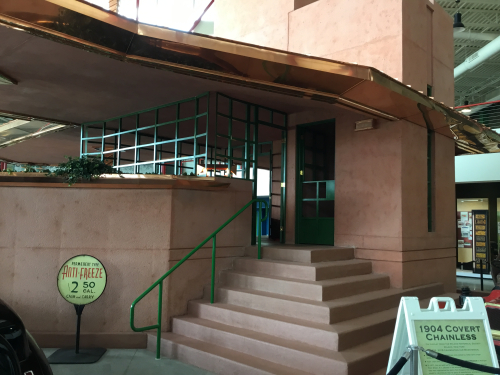 All the trademark Wright features are there, including the impracticality. (The tanks were to be atop the building.) People that own Frank Lloyd Wright homes declare them a nightmare to maintain, since the artistic vision invariably exceeded the technology available at the time. However, they are generally well-off, and they have the resources and wherewithal to either pull it off or put up with it. They figure they are doing their bit to preserve history.

The Playboy car was there in Buffalo, too. I think Northeast had one as well, but the one pictured is in Buffalo. 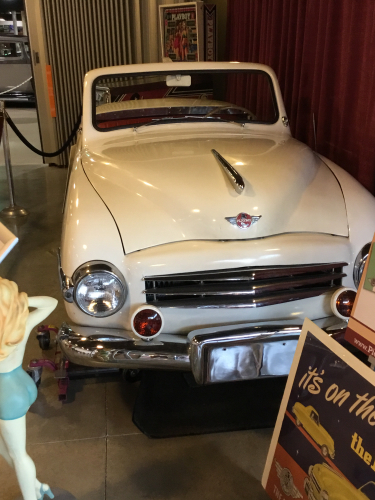 To my surprise, the car precedes the magazine, and both are named for the man of leisure who can do whatever he likes. The connotation that he does nothing but chase women only came later, doubtless as a result of the magazine.

Maybe someday I will open a place like this for Ramblers. The Harley Rambler Museum—do you think anyone would bite? For now, I am content to snap pictures of them whenever I spot one rusting in the weeds. I already did my bit for auto history by writing an American Motors post with plenty of cool tidbits such as how James Bond jumped a river in a Hornet. That’s probably as far as I will go. Rambler representation was light at both museums. I think a sole AMX was the extent of it at Northeast, and Buffalo had nothing at all. Ah, well—so it must be. Those rusting Ramblers I would have to get someone to restore for me and my cousin’s husband does nothing but Mustangs. 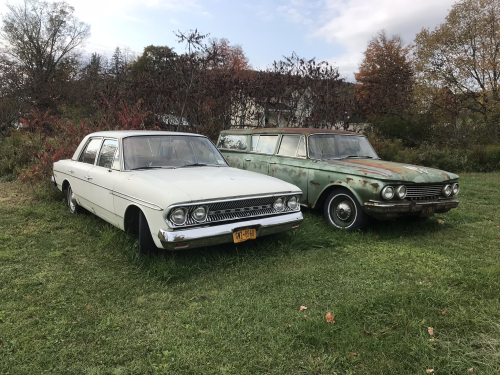 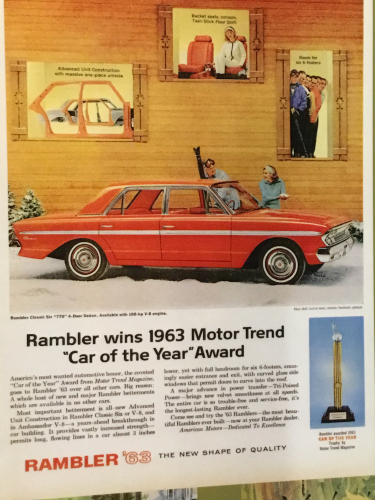